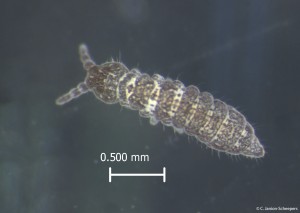 F. tilbrooki is the only neanurid found on Marion Island, where its numbers are often low. However, this species is very abundant on nearby Prince Edward Island (Chown, pers. comm). Friesea tilbrooki (Wise 1970) has been synonymised with F. viennei, which occurs on Macquarie Island, Bouvetøya, Heard Island and South Georgia (Convey et al. 1999). Studies have also suggested that F. tilbrooki may be synonymous with Friesea multispinosa Dens, 1947 from Îles Kerguelen (Greenslade & Deharveng 1997; Gabriel 1999). Around 2-3 mm in length, F. tilbrooki has distinct conical antennae and a long, slender, grey body. This species is often predatory (feeding on rotifers), and is known to be an intertidal and marine supralittoral species. 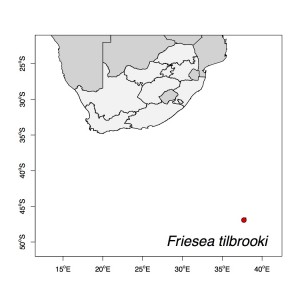